In one of his many, many self-defensive blog posts, Doug Wilson provides us the perfect example of how he has minimized (and continues to minimize) the child sexual abuse perpetrated by Steven Sitler, the homeschool alumnus who attended Wilson’s New Saint Andrews College. The blog post is titled, “The Only Kind of Gospel There Is”, and was published Thursday, September 10, 2015. Wilson writes,

The twittermob has been circulating numerous untruths, among them that Steven Sitler is a child rapist. He was actually convicted of one count of Lewd Conduct with a Minor under 16 years of age (Idaho Code 18-1508).

Yes, of all the actually important and relevant aspects of the current dialogue about child molesters Steven Sitler and Jamin C. Wight, Wilson chooses to focus on this. The fact that Steven Sitler was not convicted of “Child Rape” but rather “Lewd Conduct With a Minor,” the implication of which is, of course, that “Lewd Conduct” is somehow less egregious. Thus these evil twittermobs are the real abusers, falsely accusing poor Sitler of something he never did.

Well, yes, Steven Sitler was never convicted of Child Rape. Yes, Sitler was convicted of Lewd Conduct With a Minor. And yes, in Idaho, those two charges are distinct (though advocacy groups and other states like Washington State consider them the same). But let’s look at the Idaho statute Wilson cites to determine what Lewd Conduct with a Minor actually is. This is from Idaho Code 18-1508:

Wilson wants us to believe, in other words, that Steven Sitler isn’t as bad as a rapist. No, all Sitler did was force a young child to engage in all sorts of other sex acts that are… “better”? “Less bad”?

And we do not have to guess as to what Sitler actually did. Because the father of one of Sitler’s abuse victims did tell the Idaho court what Sitler did to his child. This is a September 7, 2005 letter written by a victim’s family to Idaho Judge Stegner. ** Content warning for explicit description of child sexual abuse. ** Click the image to enlarge: 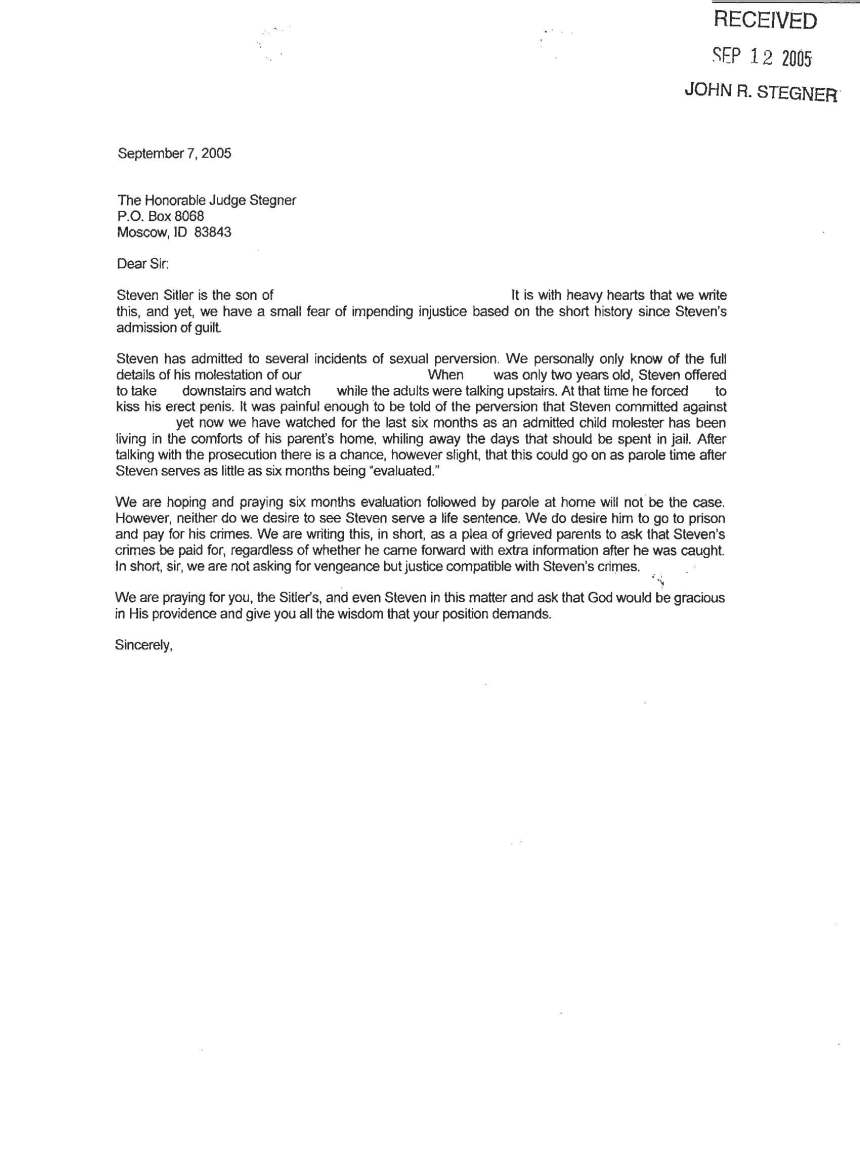 In other words, Steven Sitler lured a 2 year old child into an isolated area and forced that toddler to perform oral sex on him.

And somehow this is important to Wilson to clarify… why? Why is it only important to Wilson that he wins these little semantic games with people bringing sincere and heartfelt concerns to him regarding his and his church’s actions? So he wins on this technicality. So what? What does Doug Wilson want? Does he want us to give him a round of applause for having the courage to say what no one else did: that poor Steven Sitler is falsely accused? That Sitler never raped a child? That Sitler instead only forced a 2 year old to perform oral sex on him? That somehow that’s a relief? That somehow that makes Wilson a courageous champion of truth?

If Wilson actually cares about the God he claims to love, he should set aside his pride and his desire to play games of technicality. Because at the end of the day, it really doesn’t matter to anyone except the Idaho court system whether Sitler “raped” a child or “forced oral sex” on a child. You know why? Because both are egregious cases of child abuse, for God’s sake!

I’d like to conclude with an excerpt from Mike Sloan and Beth Hart’s important article, “Doug Wilson’s Failure to Safeguard Children,” which I highly recommend you read here. Sloan and Hart write,

Where are the voices of the leaders of Reformed churches and Reformed networks who can gain a hearing from Doug Wilson and influence thousands of other pastors in their denominations and circles of influence? Where are the voices from The Gospel Coalition? Crossway, why are you giving a voice to a man who will not use his voice for voiceless? Who is asking Wilson, “Where is your grieving heart for this baby and the other victims? What child protection training are you putting in place or experts are you consulting so this does not happen again?” 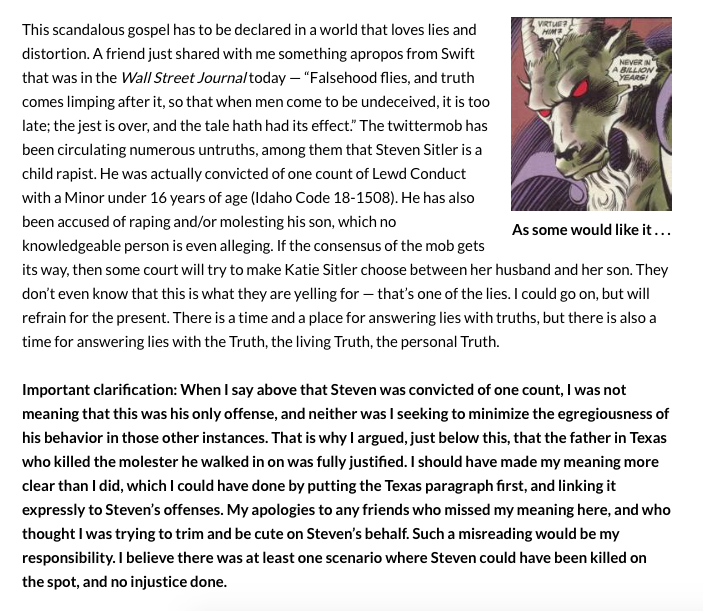 Important clarification: When I say above that Steven was convicted of one count, I was not meaning that this was his only offense, and neither was I seeking to minimize the egregiousness of his behavior in those other instances. That is why I argued, just below this, that the father in Texas who killed the molester he walked in on was fully justified. I should have made my meaning more clear than I did, which I could have done by putting the Texas paragraph first, and linking it expressly to Steven’s offenses. My apologies to any friends who missed my meaning here, and who thought I was trying to trim and be cute on Steven’s behalf. Such a misreading would be my responsibility. I believe there was at least one scenario where Steven could have been killed on the spot, and no injustice done.