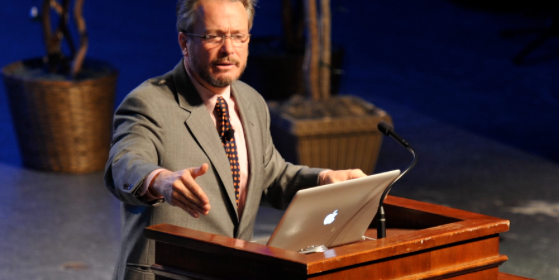 Doug Phillips is a former attorney for the Home School Legal Defense Assocation (HSLDA). As an HSLDA attorney, he was the architect behind what is probably HSLDA’s most significant legal event: rallying opposition to H.R. 6. Phillips was “the person who received the phone call from the office of Congressman Dick Armey alerting the Home School Legal Defense Association of a threat posed by bill H.R.6.” He then “launched a national e-mail alert and physically gathered a brigade of valiant home educators to descend upon the Capitol en masse.” (Phillips’s and HSLDA’s handling of H.R. 6 sharply divided the homeschooling community.)

After serving as an attorney and Director of the National Center for Home Education at HSLDA for six years, Phillips founded Vision Forum in 1998. He also founded a number of other groups and projects, including the National Center for Family-Integrated Churches and the Beautiful Girlhood Collection catalog. He is an advocate of homeschooling, the family-integrated church movement, as well as Quiverfull and Patriarchy ideologies.

Phillips was one of the main speakers at the 2009 Men’s Leadership Summit, where Phillips spoke alongside Kevin Swanson, Voddie Baucham, Brian Ray, and Chris Klicka and declared that, “We understand that the core problem with Child Protective Services is its existence” and called for “eliminating it altogether.” It was also at this conference that Phillips declared that, “It is on your watch, it is on my watch that the sodomites are redefining marriage in our land,” and that “We will lose this movement and this work of God, men, if we do not govern our households. And that means lovingly shepherding our wives.” Which to him meant keeping one’s wife from “the female sin of the internet” — namely, blogging.

But in a statement released yesterday by Vision Forum, Doug Phillips resigned as president of his organization and discontinued future speaking events not because of “the sodomites” or because he did not “govern [his] household.” He resigned not because of female blogging. Rather, he resigned because he himself “engaged in a lengthy, inappropriate relationship with a woman.” This relationship was apparently not physical but was instead some form of — “emotional fornication”? He is not clear: “While we did not ‘know’ each other in a Biblical sense, it was nevertheless inappropriately romantic and affectionate.”

Phillips is therefore no longer the president of Vision Forum Ministries for the time being, choosing instead to focus on “nurturing [his] wife and children and preparing my older sons and daughters for life.”

The full text of Doug Phillips’s resignation from Vision Forum follows. You can read it on their website here or view an archived version of it on HA here.

With thanksgiving to God for His mercy and love, I have stepped down from the office of president at Vision Forum Ministries and have discontinued my speaking responsibilities.

There has been serious sin in my life for which God has graciously brought me to repentance. I have confessed my sin to my wife and family, my local church, and the board of Vision Forum Ministries.  I engaged in a lengthy, inappropriate relationship with a woman. While we did not “know” each other in a Biblical sense, it was nevertheless inappropriately romantic and affectionate.

There are no words to describe the magnitude of shame I feel, or grief from the injury I caused my beloved bride and children, both of whom have responded to my repentance with what seems a supernatural love and forgiveness. I thought too highly of myself and behaved without proper accountability. I have acted grievously before the Lord, in a destructive manner hypocritical of life messages I hold dear, inappropriate for a leader, abusive of the trust that I was given, and hurtful to family and friends. My church leadership came alongside me with love and admonition, providing counsel, strong direction and accountability. Where I have directly wronged others, I confessed and repented. I am still in the process of trying to seek reconciliation privately with people I have injured, and to be aware of ways in which my own selfishness has hurt family and friends. I am most sensitive to the fact that my actions have dishonored the living God and been shameful to the name of Jesus Christ, my only hope and Savior.

This is a time when my repentance needs to be proven, and I need to lead a quiet life focusing on my family and serving as a foot soldier, not a ministry leader. Though I am broken over my failures, I am grateful to be able to spend more time with my family, nurturing my wife and children and preparing my older sons and daughters for life. So, for these reasons I want to let my friends know that I have stepped down as a board member and as president of Vision Forum Ministries. The Board will be making provision for the management of the ministry during this time. To the friends of this ministry, I ask for your forgiveness, and hope that you will pray for the Phillips family at this time, and for the men who will be responsible for shepherding the work of Vision Forum Ministries in the future.

Last week, I announced my resignation from the presidency of Vision Forum Ministries, a 501(c)3 organization. I retain ownership of Vision Forum, Inc., a distinct and private company, but consistent with my desires to lead a quiet life focusing on my family and serving as a foot soldier, I will not be giving speeches or running conferences at this time of my life under the banner of VFI or VFM. In addition, Doug’s Blog will become the Vision Forum Blog and will be focused on publishing reports and articles by others, along with news and information from Vision Forum, Inc.